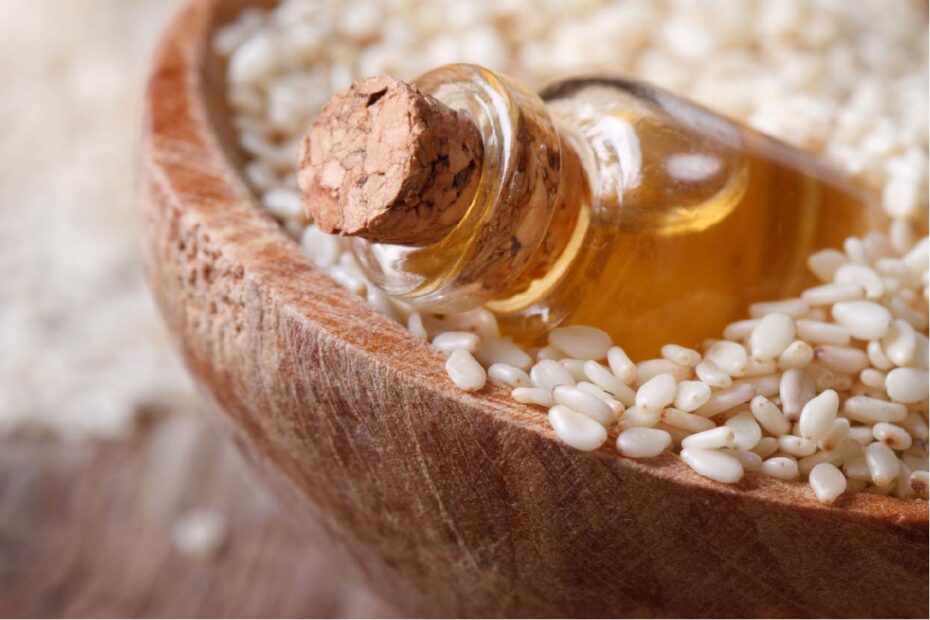 Sesame oil is the oil derived from sesame seeds. It is an edible vegetable oil for human use, and it is very popular in folk medical uses, and it comes in varieties of toasted sesame oil and Untoasted sesame oil. Classification is done by the type of seed used in extracting the oil. Untoasted oil is usually used as a frying oil, while toasted sesame oil is used as a flavoring in sauces, soups and other dishes and the difference can easily be told. Untoasted oil has a light and light color similar to vegetable oil, while the roasted variety has a richer and darker color. This variety has a strong flavor and smells like a hazelnut. Unroasted type is milder in flavor.

Sesame, or what is also known as jalgalan, is a type of plant that follows the pedal family of terrestrial plants, and it is an oil crop. Sesame cultivation is spread in many countries of the world, especially the hot ones. Myanmar is one of the most productive countries for it, followed by India and China. This is characterized by The plant has green or purple oval-shaped leaves that are opposite on the lower part and alternate on the upper part of the plant, and its plants bear bell-shaped flowers that are either white or pink.

The fruits are the seeds that are formed inside capsules or small pods, which are small seeds rich in oil, eaten on a daily basis, leading to distinctive health results. They have been used in alternative folk medicine for thousands of years. Some of the benefits of using and eating sesame seeds are:

From the fruits of sesame, you can get what is called sesame butter, which is famous for its tahini, which is used in preparing many meals and dishes, especially in the Middle East.

The fruits and seeds of the sesame plant contain many elements and components that give it high nutritional and medical importance, making it at the forefront of natural plants and herbs that humans use to obtain greater benefit. Fiber, calcium, iron, magnesium, potassium, zinc, vitamin C, phosphorous, sodium, water, sugar).

The commercial type of oil varies in its color from dark reddish yellow to light, depending on the color of the pressed seeds and the method of grinding them.

The oil is rich in oleic and linoleic acids, which together make up about 85% of the total fatty acids

It can be used to produce a solid and good soap that dissolves well in water and gives a good foam using a mixture: 30% sesame oil + coconut oil or palm kernel oil

the oil may contain nutrients and components in lower proportions than sesame seeds and fruits, due to the possibility of exposure of these seeds to heating, heat and other factors during the oil extraction process, which lead to the breaking and volatilization of these components, but the sesame oil remains with a high nutritional and therapeutic value and benefit.

• It also contains vitamin E, which is an important vitamin for vision and reproduction; The health of the blood, brain and skin.

Steps to get sesame oil from sesame seeds: –

Extracting the oil manually at home may not give the desired amount, but it guarantees obtaining a high quality oil with a high nutritional value, and also sometimes the oils we get from the market or shops may not be 100% natural, we offer you an easy and simple way to make sesame oil at home: –

At first, we need: (a cup of sesame seeds, preferably new and fresh, a cup of water, an electric food processor (blender)).

• Put the cup of sesame in a stainless-steel pot, to roast the grains on a low heat with continuous stirring for 2-3 minutes, or until they acquire a blonde color.

• Transfer the roasted sesame to the blender and grind it well

• Put the ground sesame in a bowl, add water to it, and mix the sesame and water until we get a sesame paste.

• Knead the sesame paste with hands well, and leave until we see the sesame oil float to the top.

• The oil is separated in a clean jar.

• Sesame oil is kept in a low humidity place.

As we mentioned earlier, there are two types of sesame oil, toasted and untoasted sesame oil

Sesame oil is the most famous among natural oils. It was commonly used as an alternative treatment and was used in preparing food dishes, and it was known for its benefits for hair, face, joints and the body in general. Here are some of its multiple benefits that have been proven by scientific studies and research: –

It contains a high percentage of antioxidants: sesamol and sesaminol, which are compounds that help reduce cell damage, the accumulation of which may lead to diseases and infections.

It has strong anti-inflammatory properties

Good for the heart: Sesame oil is a healthy oil rich in monounsaturated fats, which may reduce heart disease risk factors.

The use of the oil helps in controlling blood sugar, especially for diabetics.

Contributes to the healing and healing of wounds and burns

Protects from the sun’s UV rays

 Useful and important in building and growing the bodies of children, especially infants, when massaged with sesame oil

It is true that its benefits and uses are multiple and may be comprehensive, but sesame oil has cosmetic benefits and special advantages

When using it for hair, it makes us dispense with the use of chemicals in the treatment and improvement of hair: –

1. the oil possesses fatty acids and vitamins that can prevent hair from entering an early graying stage, and maintain your natural hair color in colour.

2. One of the benefits of the oil is also its ability to help greatly in building healthy and strong hair roots.

3. Moisturizing and calming the scalp, especially for people who suffer from scalp diseases or use hair dryers. It calms the itching caused by dryness and flaking of the skin.

4. It works to form a cover on the hair and protects from the harmful rays of the sun.

5. Sesame oil plays an important role in stimulating and nourishing the nerves, which enhances the effectiveness of blood circulation, which in turn increases hair strength and health.

For complete results and real benefits, it is recommended to apply and use the oil on the hair in periods and quantities

Regular for 20 minutes a day.

The use of sesame oil helps to maintain and care for the beauty of the skin, as it is used in the installation and preparation of mixtures

It is frequently used to care and whiten sensitive facial skin, and works to get rid of the signs of aging and hide

The appearance of wrinkles and gives satisfactory results and its effect lasts for a long time, here are the highlights

These ingredients will work together to lighten the skin tone and remove dark spots that distort the beauty of your face. put

Mix the mixture on the skin of your face and massage your face in a continuous circular motion for 10 minutes. Leave the mixture for a while

Half an hour, and finally wash your face with cold water.

With each other and use it on your face, for 5 minutes, then wash your face with soap and water.

3- Sesame oil to moisturize the skin

Wash your face well with lukewarm water and dry it, then massage the face with sesame oil, in a gentle way, repeat the process every night to get great results, let the face absorb the entire oil.

Many people are looking for a substitute to sesame oil, either because of the price or the shortage in supply sometimes, or because of an allergy to sesame, and this is common for some people. According to the FDA sesame is being added as the 9th major food allergen effective.

Some substitute sesame oil is:

2- Coconut oil: It is also a good alternative

3- Flaxseed oil: It can be an alternative, but it is not recommended in cooking for a long time because it is very smoky

There are several other alternatives, such as avocado oil and sunflower oil…

Warnings and advice when using or eating sesame oil:

Despite the multiple benefits of the oil, at times, caution should be exercised and refrained from using it.

Use by pregnant and lactating women

Some people may suffer from allergic reactions due to eating or using the oil.